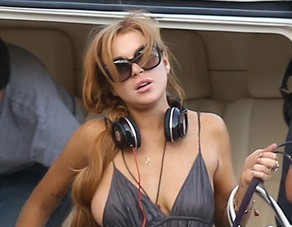 Lindsay Lohan has just been sued for $5 million she doesn’t  have … all because of her highly-publicized drug problems, TMZ has  learned.

D.N.A.M. Apparel Industries — a clothing manufacturer — just  filed the countersuit against Lindsay in response to Lindsay’s  lawsuit against the company.

In her lawsuit, Lindsay says  she struck a business deal with D.N.A.M. in 2009 allowing them to manufacture  clothes for her “6126” clothing line — but D.N.A.M. stiffed her on a massive  licensing fee. Lindsay wants $1.1 million in damages.

But D.N.A.M. is now  coming back at Lindsay for nearly five times that amount, insisting SHE’S the  reason their business deal fell apart.

According to D.N.A.M., the company  did its darndest to sell their 6126 clothes to high-end third party retailers —  but by spring 2010, no one would touch the brand … because Lindsay was back in  rehab … and her legal problems were playing out in the media “like a Greek  tragedy.”

D.N.A.M. says it invested millions in 6126 for nothing — and now it’s  suing for breach of contract and fraud, demanding at least $5 million in  damages.

And the irony … Lindsay’s currently back in rehab yet  again.

Lindsay’s attorney, Perry C. Wander, tells TMZ … “The license  agreement does not have a morals clause that allows the company to suspend  payment for any behavior.  The contract is not in LL’s name thus she cannot  be held personally liable. The cross claim is therefore frivolous and totally  without merit and will be defended vigorously.”